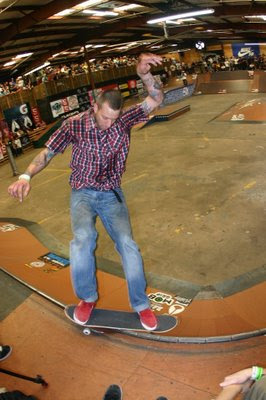 Sunday morning was a mess. On Saturday night, we all got in from the show at various hours of lateness, and all celebrated the night a little more than your average person would have. We had a good time. The show was insane, hanging out with bros and pros alike at the Resevoir Bar really took me back to the old days, when I would frequent the Art Bar in Riverside and see everyone I know having a good time. I really have to hand it to the guys at the SPoT for knowing how to throw a party. And I also have to hand it to Chris Jolly for looking so good in those teal girl shorts. And Rob Meronek for that White suit. I bet if I had a kit like that, I would have girls all over me, too.


Since Saturday morning, everyone in the group wanted to go skate. Something about watching people skateboard for 2 days straight might do that to you. We made plans to go to the Bro Bowl, but slept through them, so we ended up going right to the park from the hotel. I found a way to wake myself up promptly at 10:30, right before checkout time at 11. Waking up everyone else, however, was another beast of a task entirely. I didn't mind though, but since I had to play the responsible adult on the trip, I made it my task to deal with the lovely room service people at Day's Inn. I had finally met the one person on staff who spoke english, but unfortunately it wasn't the english I wanted to hear. "You have to get out." I still have chills from that lady's voice. (I mean, I think it was a lady's voice.) I can't hold it against her for having a shitty attitude, because if you've ever been to a hotel near the park around pro contest time, you'd know - employees of those places usually have a ton of shit to clean up afterward. Yo dog, I heard you like Tampa Pro, so I installed a TV in your Tampa Pro so you can watch Tampa Pro while you chill with your friends at Tampa Pro.

We made a quick stop for breakfast, and we got to the park sometime around 12 or so. It wasn't long after that when I heard about Antwuon Dixon getting the permaban from the park. I'm not sure what happened to warrant the boot, but it did remind me of last year, when Nate Johnson was telling me how stoked he was to be locked up with Antwuon Dixon, and be bailed out and back at the park the next day thanks to Jake Schrickling. Memories! So back to the contest. Once I got my Gatorade from a hot mom and wolfed down my beans and rice in a Pepsi cup, I headed back on to the course so I could shoot some more photos. I got a good spot in the corner and stayed there for a bit, but Adam Dyet killed it - totally blew it out by vomiting all over someone's shirt that was right by my feet. That's rock and roll for you right there. You'd better believe he earned that spot on the Skatepark of Tampa Party Team.

At this point, finding a spot to stand and watch was nearly impossible, and finding a good photo spot was hard too. I pretty much had to keep my eye out for when a filmer or a photographer left his spot, or a skateboarder or two dropped in at a key location. I finally saw an opening above the long quarter with the embedded hip, so I awkwardly ran across the course with my dorky photo bag and scurried up the ramp like a kid sneaking in for an autograph.

I stayed at this spot for a good while. While I was there, I saw Nick Dompierre K-grind to fakie over the hip, Ed Selego grinding it fakie, and Mike Peterson ollied the whole damn thing. Later on, he tried to kickflip it. I also saw Gershon Mosely skating the corner by this thing, which was cool - I haven't seen or heard from him in a good while.

This one is super big because it's Matt Beach and he's one of my favorites.

Nick Dompierre did this over that hip thing to fakie. This one is real big cuz he has a dope hat that I want. Want one like his? You have to go to Solstice Skateshop in Massachusetts. Get me one while you are there. Thanks.

Eric Koston, 5-0 to fakie around the corner.

Kyle Berard. You rip, homie. I think this is a switch smith grind.

YES, I did have my camera on the right setting. It's just that John Rattray was going so goddamn fast it looks blurry here.

People come to skate Tampa Pro from all kinds of exotic locations. Milton Martinez is from Mar del Plata Argentina and likes to grab melons. And me, I'm from Jacksonville and I like to grab melons.

Come to think of it, tons of dudes came out of the woodwork this year. Karl Watson was there skating (hope you feel better homie), Pete Ramondetta was there,(sooo gnarly) pretty much the whole Girl/Chocolate team, even crazy old Matt Field showed up to do handstands, give hugs, and skate out of the park in the middle of his run.

Unfortunately, we had to cut our trip short, as some of us had jobs the next day, some of us had court dates, and some of us just wanted to go skate before we got home. I was bummed, but leaving early gave us the chance to finally hit up the Bro Bowl in downtown Tampa. Although we missed the finals, I had a great time anyway, and I really want to say thanks to they people at the park for an awesome event. Clements, you hooked me up big time, and you saved our crewmate from having to sit on the deck and stare at the moat all day. Schaefer, thanks for everything, your park and your employees are all cool as hell. Including the Wizard. Most importantly, I want to thank everyone who was part of the trip. Even though I stressed, got nervous, and drove badly on the final stretch of the trip, I had a great time. I'm still sore from the trip a week later, but that's OK - its a reminder of a rad trip.

Before I go, here are some images of the Bro Bowl in Downtown Tampa near the PJs. We didn't come here to shoot, we just came to unwind and have a good time before we left. I was glad to finally skate here. I was even more glad that I was able to run to my rental van and drive off before the nastiest tow truck driver I'd ever heard of carted it off. I heard they were going to get rid of this place a few years back. I'm glad they didn't. http://savethebrobowl.com/
Posted by Norm Stovall at 3:44 PM