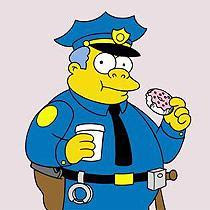 Welcome to Florida, where not only will you get kicked out of a skatepark and have the police called on you for dropping in on a ramp, but you also just might get assaulted by the Po-Po for skating around in front of your house. Even if you are 10 years old. From the Sun Sentinel of South Florida: (link)

DAVIE - A rookie police officer accused of slamming a 10-year-old boy against his cruiser for skateboarding in the street has received a two-day suspension and been ordered to attend anger management classes. "He threw him like he was a rag doll," said the boy's father, Joseph Smith, who witnessed the April 6, 2008 incident and filed a complaint the next day. Smith says his son was left with a cut on his knee, a bruise on his chest and a fear of police.

The article goes on to mention things like the officer taking anger management classes and the dad dropping charges... which I don't think I could ever do. I just have one thing to say... WTF?
Posted by Norm Stovall at 2:17 PM