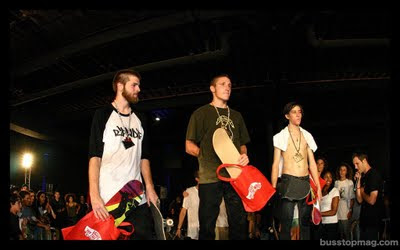 I've finally recovered from my trip to Manny Mania, and it's taken me five days. What a weekend in Miami! Thanks to hotel arrangements courtesy of Red Bull, a slew of Jacksonville heads were able to make the trek down to Manny Mania in Miami this past Saturday. I have to say that the contest was a very unique experience, as was the rest of the weekend.

Me and Rachel Best headed down to Miami on the morning of the contest. As usual, we were running late, but with the help of Rachel's dad's Honda Pilot, we got to Miami just in time. The drive wasn't nearly as bad as I had remembered it being from last time I went. Here are some notables about the drive down:

South Florida has lots of Mountains along 1-95. They are made of trash. I must have taken photos of at least 3. I could see 2 from my hotel room!

The Runway to Ft Lauderdale/Hollywood airport is like 500 feet from the highway. Seriously! Look at it. I thought a big ass plane with Shamu on the side of it was going to land on me on the way down there.

Everyone is Beautiful in Miami. Except the tourists.

We got to the contest just as it was starting. The location was definitely unique - the contest was held inside a sound studio, with the Manny Mania obstacles in a gated off area in the middle of the room, surrounded by bright studio lights. The course was packed, and people seemed to be having a hard time getting tricks in during practice due to so many people skating. Inside the building, there were local chefs cooking everything from corn dogs to rice and kebabs. It smelled amazing, but I didn't really feel like shelling out 12 dollars for meals on a paper plate. Once the contest got underway, things cooled down a bit on the course. There were 8 heats, each with about 5 dudes skating. People were allowed about 5 minutes to practice before their heat, and then 5 minutes to skate during their heat. Between heats, mayhem would break out again until the next practice session started.

Most of the Jacksonville guys skated pretty well, although Trevor was riding with a messed up ankle. Ty Baby did some amazing stuff too, but I guess it wasn't good enough to take him to the finals. It was a shame, too. I think he deserved it.

Ty on some Flip-in, flip-out stuff

During the heats without Jacksonville guys, we escaped to the Rally's down the street for lunch. Or was it a Checkers? What's the difference anyway? The neighborhood was a little sketch, but that never matters when you are hungry, does it? Plus, you really can't fade those seasoned fries. Nuh, uh.

Before the finals got underway, Red Bull had a DJ and two rappers perform for everyone. I can't remember if they were breakdancing or not. Maybe I'm confusing them with people from the Summertime in The City galleries from JaxReax. Miami style dictates that you must wear a white sports coat at all times. Ivan, who helped with Hotel arrangements, and Ryan King from Red Bull Check out Lizard King hiding behind Jake back there O-Town was at Manny Mania. They are pretty much all Winners. That's Bert Wootton on the Left, and Chris Blake with the Black 5Boro shirt.

Bert Wootton - Can YOU no-comply into a manual? - Photo: Red Bull/F. Galland

The finals ended with Aaron Collier in first, Bert Wootton in second (Bert also won Best Trick), and Cody Lucas in third. It was an awesome contest, and some really amazing tricks went down at the end. Everyone there seemed psyched about the contest, the presentation, and the good times. After everything was said and done at the contest, we were off to find our hotel.

...Which was located right across the street from the sketched out Checkers (Rallys?) we ate lunch at. It was amazing how quickly things went from looking sketch to looking fresh as hell. Red Bull had us put up in the Hilton, which is pretty much the nicest hotel I've ever stayed in. No blood stained sheets, no doors without doorknobs... none of that! We actually had to pay 38 dollars to valet our car, and not only did the valet park the vehicle, but he also carried our luggage to the room. Our room was really nice, too. Instead of a TV remote, there was a wireless keyboard. Not sure what the deal was with that, so I didn't mess with it. Johnny, Chill Jill. Note the black eye-Johnny got mugged by 3 dudes with rifles in front of 13 Gypsies in Riverside on Friday night before heading down. Next time you see him, tell him you are glad that he is alive. Nate Johnson and Bruce. (It's rare that I see Black Nate without 2 drinks in his hand)

Saturday night, I ended up hooking up with some Riverside heads and heading down to Bayside with them for some eating and drinking. It was a mile away, but we didn't realize that until the cab dropped us off. I think the dude went the long way, too. Rad! We were all late getting out, and unfortunately everything was closed except a latin music club which looked like an outdoor bumper car rink filled with dancers. We got drinks there, hung out on the sidewalk, and watched a crazy old man dancing with his small dog. Later, he put the dog in a Baby Bjorn and pedaled off in his bike. WTF? Also, skin-tight white pants are in full effect in Miami.

After that, we all walked back to our hotel to get a small amount of rest before our long trip back to Jacksonville. Thanks to Ryan King at Red Bull for an awesome trip! You've done awesome things for Jacksonville, and we can't thank you enough.
Posted by Norm Stovall at 7:54 AM