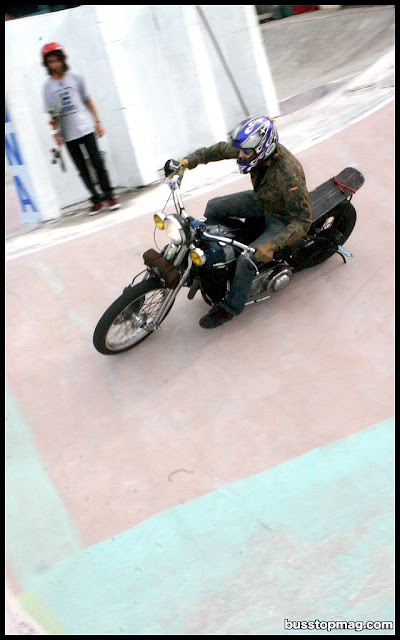 This past Saturday, something really great occurred to me. Something that I'd wished I'd realized sooner. What I realized is this: If you love skateboarding, partying, motorcycles, inexpensive beer, and vintage autos, Kona Skatepark is a great place to have a party. I also realized that there are tons of other variables you can throw into this mix to reach that conclusion.

This weekend the Creature team came through town to demo at Kona, along with the rest of the vert skating party goers in town. It was a vert Jam, and I think that meant anyone could skate vert so long as they could hold their own. Kona's huge competition style vert ramp was packed with dudes throwing down heavy tricks, and at one point I caught a rare glimpse of the vertical vampire known as Darren Navarette. I tried taking his photo, but apparently that doesn't work too well on the undead. Or maybe I was just to slow with the shutter due to the Sweetwater.

As usual, rain threatened the day's events, but in Typical Kona style, they handled it, and by the time I showed up (thanks guys) it was dry, skateable, and busy as heck.

As soon as I got to Kona, I was directed to the 5 dollar commemorative cup, emblazoned with a Kona 25th Anniversary logo on one side and an Indy logo on the other. You buy one of these suckers, and you get free Sweetwater beer for the rest of the day. It was a great idea at the time. I mean the beer was good, and I have this rad cup. I also get a tad too brave if I try skateboarding whilst drinking.

So there was beer to drink, skateboarding to watch, and a pig roast to gawk at. There was also a classic motorcycle and auto show, which came to an exciting conclusion when Curtis from Wolfgang in 5 points hauled ass around the skatepark on his 1953 Harley with a custom skate deck seat mounted on the back of it. I had a rad time, and I don't have many photos to show for it because of that. I think it's becoming a general rule that the more fun I'm having, the less I focus on shooting photos for you people, whomever you may be. Sorry about that. Maybe that'll be more motivation for you to show up to the next Kona blowout? I hope so, cuz I'd love to see you there.

Some photos of my homies here.