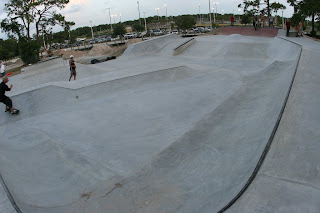 So in some way or another, I got word of a new skatepark being built at the Ed Austin regional park in Arlington, right off Monument Road, just south of where Monument meets Ft. Caroline. Apparently, it isn't quite "open" yet, but that doesn't deter tons of people from strolling over the mashed-down fence to skate there. Yesterday, I felt inclined to participate in this activity, so I stopped by the park and took some pictures.

From how it appears to me, this park is awesome for those who love to cruise a skatepark without having to push. Up high, there is a brick-lined quarter pipe, which rounds out into a cement quarterpipe/bowl that extends along the north end of the park. Just below the quarter pipe after the flat, the park drops off into some pyramid-type objects, a grind box on the south end, and a pyramid type thing just below the transition on the north edge. On the way down this slope on the south most side, a china bank extends along the side of the slope. On the lower, eastern-most side of the park, there is a bowled corner, a rounded wall with an extention, and some benches with coping lining the outer edge.

Overall, I'd say that this park is not for the faint of heart, and if you come out to skate here, you'd better bring some tranny skills with you, and I don't mean the ones you picked up at the Metro the other night. The brick quarter pipe on the high end of the park takes some getting used to, and you'll need a little bit of effort to get enough speed to hit it just right. In the middle of the flat on the high side just below the brick quarter pipe, there is a little bump, sort of like a miniature, round version of Kona's mogul.

The Ledges and rails that run along the middle portion of the park are hard to approach slowly. Due to the design of the park, you'll probably be approaching all of the obstacles at speed, so remember-if you are going to try a trick here, you'd better commit.

As far as size is concerned, this park is probably about the same size of the Emerson park, or Cuba Hunter Park, for those city officials who may be reading this. (also, just kidding about jumping the fence, that was some other guy.) The park here is by no means a street park, but there are some nice ledges and a good flat rail along the northern edge of the park. The only problem with these obstacles though, is that kids were sitting on them when I was there.

The people that were skating the park yesterday were all skating it pretty damn well, and I think that may have to do with some of them coming straight from that training facility in Atlantic Beach that they call SKATELAB. In summary, I'll say this. Don't be afraid to visit this park, but be sure to bring a board with some decent sized wheels, and be prepared to skate some roundwall-even if it is just a corner or two of it. And have fun.