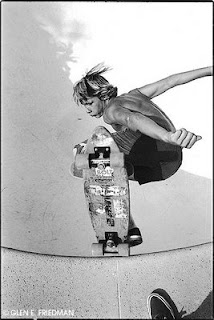 Some new news from the outside skate world, since I have nothing of my own to report on as of this exact moment:

As reported by Skatedaily.com and Pool Snob from Fuel TV, legendary Z-Boy Jay Adams has been released from prison and is now back on the path to a cleaner life. As reported by Pool Snob at Fuel TV:

After more than two-and-a-half years behind bars, skate legend Jay Adams was released this morning, July 7, from the Federal Correctional Institution in Sheridan, Oregon. Bussed to Portland and flown to LAX, Jay will be living at a halfway home in Southern California. He’s also been offered a job as facilities manager at Hurley headquarters in Costa Mesa. For the time being, Jay says he’s going to stay put in Southern California. Probably a wise choice, since the frontier of Hawaii’s North Shore can make things tough for people who often find themselves surrounded by their personal demons.

You can read the rest of this story here.
Posted by Norm Stovall at 1:17 PM