How to Play SKATE. 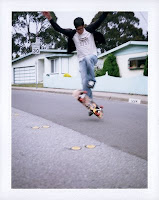 Here is how the folks at èS Footwear define the game of skate over on their website:

"The Game of SKATE is based on the basketball Game of HORSE. Here's how to play:

The first skater tries a trick, makes it, and everyone else has to make it. Whoever doesn't make it gets a letter. The first letter is "S", the second letter is "K", and so on, until "S-K-A-T-E" is spelled out, and that person is out of the game. When it's the first skater's turn again, he tries another trick. If he makes it, the whole process repeats.

If the first person misses the trick he tries, the second player tries his own trick. If he makes it, everyone else has to make that trick, in order. If anyone misses, they get a letter, and so on."

So in case you were wondering, this is how it's done. Maybe you should try playing SKATE with your friends. Who knows--there may even be a local event coming up soon featuring these very same fundamentals. Why don't you go ahead and start re-learning those pressure flips you used to do so well?
Posted by Norm Stovall at 8:32 AM