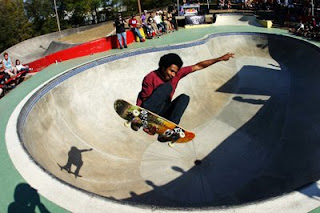 (note: For Part 2, don't forget to check Here.)
Kona Skatepark is the first battleground in the 3-part contest known as the Florida Bowlriders Cup. The Bowlriders Cup is a big deal in Florida, and it attracts some of the best bowl skaters in the business of bowl skating. The contest features 5 divisions, consisting of Women’s, Grom, open am, pro, and masters. Competitors compete both for individual wins per event, and for overall points throughout the 3 stops of the contest. For a more detailed summary of the points structure and standings, you can go to the official website for more information.

When I arrived at Kona early Friday afternoon, the Women’s division was just starting. I’m not sure what I was expecting, but there were definitely some surprises in store for me in regards to the talent. Julie Kindstrand had some strong lines, and I saw Brooke Crawford was doing some sick styled-out slasher grinds. I think she was the only rider that stayed on her board long enough to get invited out, not sure though. All of the ladies were skating well, and it was a rad way to start the day. I don’t know what I was expecting, I guess the last time I saw a women’s contest, it was at the warped tour, and nobody was even going over the coping. Actually, I think I entered that contest in the guys am event and I didn’t go over the coping, either. I wish I had been able to take more photos, but showed up late.

After the ladies came the open am division. The talent level here was also nuts, with lots of local rippers showing up, like Cason Kirk with some sick slide'n'rolls, and a handful of other dudes whose faces I recognize, but whom have names I can't remember. (I'm pretty sure that kid is a local, since I see him at all the Kona contests). Steven Pineiro of the 'Super Pineiro Brothers' did an inverted 540 in the deep end, and then came back around to pull a backside kickflip indy. I think the severity of his tricks helped him get away with those full stop axle stalls he was doing in the shallow end. Sick tricks though. I think he did a rodeo flip, too.

Other names I made note of: Al Brunelle, a.k.a. Al the Kid from Colorado sped through his runs, did some sick tricks, and stayed aggressive. Keith Baldassare gave a shaka for the cameras in the middle of a stand up 5-0 grind in the deep end, and Timmy Knuth had a sick run with a deep end to shallow nose grind with a nollie pop out. Timmy is truly an all terain machine, he won the Dew Tour trial at Kona, and went on to win the finals in street last summer. It's too bad that he got hurt in the pool this weekend, because I think he had a great shot toward making it to the finals.