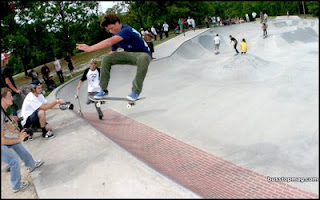 The second stop of the Bangers contest was at Ed Austin Park off Monument Road in Arlington. Two separate obstacles were featured here, the first being the brick quarter pipe modeled after the Maitland banks near Orlando, and the second being the Jersey barrier on top of a bank. By this time, the clouds were coming in overhead, which was a welcome sign, but people were still suffering from the intense heat.

It seemed like all hell had broken loose when the contest started on the brick quarter. There were collisions left and right, a couple of camera lenses got bonked by flailing boards, and a couple of people may have gotten their feelings hurt just a little. Darkness brought his own props, which included a Power Wheels Jeep to be used as an extention. I don't think it worked out too well though.

After this everyone moved to the Jersey barrier. Unfortunately, I got sick from the heat, and had to miss most of this, but I heard that George Evans and Max were holding it down. After all was said and done, everyone headed to the next spot for the last contest on Go Skate Day: Bangers for Bucks at Kona Skatepark. More coverage coming tomorrow, including video!

Here are the photos from Ed Austin:

Guess what's about to happen here?

I wonder if Craig ever ended up doing that Bangers for Blunts contest he proposed.