Photos From Ante Up: Round 2 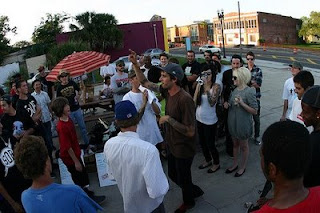 If you didn't do everything you could to get out to this event, there is something wrong with you! Everyone and their mom was there, so if you missed out, you really missed out. First of all I want to say thanks to Kevin Graver for putting all this together, and thanks to Zombie Bikes for allowing us to party there. Ian, AKA Triclops, is running shit in Springfield like he is the mayor! Actually, he's going to be my write-in for the next election. Also thanks to everyone who contributed to the event, and everyone in general for just showing up! There were so many people I haven't seen for years, and lots of new faces too. ANTE UP! Don't forget to check out my flickr for the whole set of photos.

The Man in Charge

Faruk was supposed to be my replacement for the game, but I wanted to lose so I went myself. Check out his Norm disguise.

As mentioned before, more photos here.
Posted by Norm Stovall at 9:55 AM

Email ThisBlogThis!Share to TwitterShare to FacebookShare to Pinterest
Labels: Ante Up, Contest, Springfield