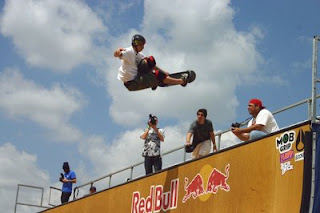 Finally, we were in Tampa. First thing on the list was breakfast. I've heard lots of stories about awesome breakfast places in Tampa- some in Ybor, some near the park... we partook in none of that. We went to a Denny's near some strip clubs with graffiti all over them. Sure, the food was less than fantastic, but there is something to be said about reliability. And Denny's serves breakfast after 11am for slack asses like myself. I can appreciate that. Once we finished up at Denny's, we headed to the park. Getting in the park was hassle free, and I'm glad for that. With most events these days, you need to talk to 40 different people, acquire five wrist bands, and can only stand in one spot to shoot photos. I'm glad that style of event management doesn't take place at the Tampa Pro contest. We got to the park sometime during the warmups for the first heat on Saturday, and there were already plenty of people skating the street course to keep your eyes busy and your neck tired. I was glad that I was able to get a spot on the course with no issues at all.

I took this photo of Murf with my phone, and then used that app that made his titties jiggle.


Vert was in full effect when we got there, and it didn't take too much time for it to be over. There were ten competitors total in pro vert. Not a lot, but it was rad to see guys like Mike Frazier skating in a contest, he's always been one of my favorite vert skaters to watch. Lincoln Uueda was there following his normal flight pattern. It's a good thing they just rebuilt that ramp to be so solid, because otherwise I think his body jars could have leveled the whole thing. I watched some solid runs by Danny Mayer, PLG, and Anthony Furlong, too. When all was said and done, PLG took first place.

The street course this year seemed pretty basic, but solid. Didn't seem too much different from last year as far as I remember it. There were some notable new things, including the long quarter across the back of the park, with a wide hip sticking out of the middle of it just below the coping. I don't know what this kind of thing is called, but it was kind of gnarly, lots of people were doing long grinds over and around the hip, and I even saw Dennis Busenitz wallride UNDER the coping, and above the hip-like on a surface that's maybe a foot tall. Insane.

Keegan Sauder. Note, this was on a bank to wall, not a quarter pipe, so it's extra gnar.

Strubing has one, too.

I couldn't read my handwriting from when I wrote this guy's name. He was dope though, whoever he is. Somebody help me out.

When I was taking breaks from shooting the contest, I made it a point to hit up the snack bar for beans and rice. I don't know what they put in that stuff, but damn do I wish they had that at Kona. Just give me some of those sweet ass black beans and yellow rice like they have here, a bottle of hot sauce, and a PBR, and I'd be in skateboard heaven. (This is not meant as a diss to Kona though, those Grandma cookies and Kona dogs nourished me through my childhood.)

After things at the park were winding down on Saturday, we all took off to the hotel to get ready for the Ghostface and Raekwon show at the Ritz in Downtown Ybor City. The show was part of the Tampa Pro weekend, and organized by the guys from the park. As far as shows are concerned, this one is one of the best hip-hop shows I've been to in a while, and I was stoked to be around so many people that I looked up to, and shared something in common with. (I'm not talking about those stinky hand-rolled things people were passing around in the audience, FYI.)

After the show, we all found our way back to the Day's Inn, and some of us found a crew to play dice with. Loudly. At 4am. Good thing I'm a heavy sleeper! We were all having a good time, and it would show the next day.