Attn: Nerds - Skate it for Nintendo Wii, Balance Board Compatable. 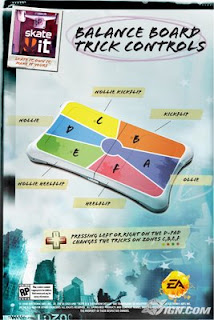 I just spent about 20 minutes following up on my previous story on Skate It for the Nintendo Wii. Well, my computer decided to eat the story I wrote, and since I'm impatient and short on time, I'll give you the general gist of what I wrote about this upcoming skateboarding game for the Nintendo Wii.

-Skate It will feature 2 ways to control the game. One way is to hold the Wii Remote in your hand, flipping it from side to side for flip tricks, quickly jabbing the nose of the remote up or down for ollies and nollies, etc. The other way, is to use a combination of the Wii Remote and the Wii Balance board, which is illustrated in the image on the right.

-Skate It for the Wii will feature the same general gameplay as EA Blackbox's breakthrough skateboarding game, Skate., but with simpler, more animated graphics, less pedestrian interaction, and a slightly altered city environment. Not really so much of a sequel, as much as it is a spin off.

-You can find more info about EA's Skate., Skate It, and the Upcoming Skate 2 at the following sites:

http://www.ea.com/skate/ - Official Webpage for Skate., with trailer clips for Skate 2.

www.joystiq.com - Awesome gaming blog site blogging about hands-on time with Skate It for Wii.
Posted by Norm Stovall at 9:56 AM