Paul Hart featured on the Berrics

Jacksonvillian turned Californian Paul Hart, as featured on the Berrics.
Posted by Norm Stovall at 1:13 PM No comments: 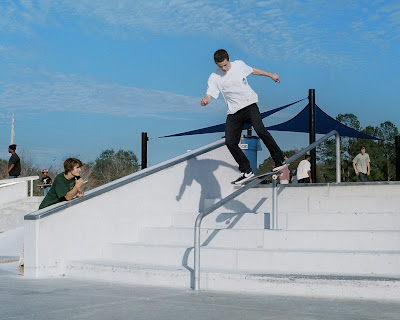 Posted by craig lockwood at 5:32 PM No comments:

Tampa Pro 2012 is a wrap! Stay tuned this week for my take. In the meantime, here's a video from the guys at the Skatepark of Tampa summarizing the finals.
Posted by Norm Stovall at 8:23 AM No comments: Another episode of Florida Bowlriders has come and gone, and I'm sure glad I'm not the pool at Kona. Poor pool took abuse like nobody should have to go through. Regardless, that thing stood strong and is skateable still.

For the complete gallery of photos from my camera, check out the flickr gallery here.

For even more rad photos with captions, check out the gallery over at No Comply Mag. No Comply has a sick blog that covers lots of Florida skateboarding events and news. For the full results, go here.

Posted by Norm Stovall at 7:24 AM No comments:

Posted by Norm Stovall at 8:27 PM No comments:

Check out the T-U's coverage of Florida bowlriders 2012 here. You can see what looks like everything they shot, bails and all.
Posted by Norm Stovall at 11:56 AM No comments:

Email ThisBlogThis!Share to TwitterShare to FacebookShare to Pinterest
Labels: other peoples' news, Times-Union

Damn right I got footy of Spencer! More from Florida Bowlriders 2012, coming soon.
Posted by Norm Stovall at 5:39 AM No comments:

Courtesy of Ryan King, filmed by Trevor Stevens and Edited by Ryan King

Posted by Norm Stovall at 8:10 AM No comments: