An Interview with Writer and Director L. Gustavo Cooper 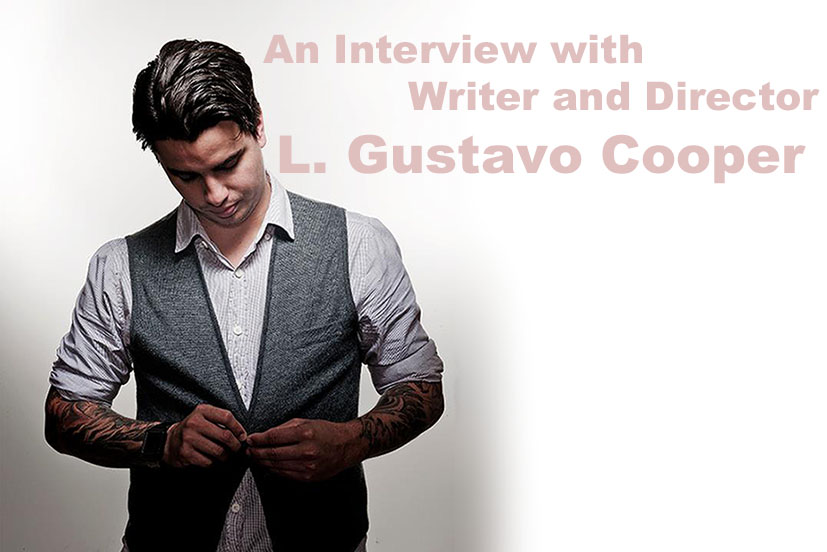 I'm really stoked to have done this interview. Ever since the first details about Mr. Cooper's newest project, Velvet Road surfaced, I have been intrigued. Having traveled all over the place with the short film and promoting it in festivals, he was nice enough to answer a few of my questions. Photo © Jensen Hande 2012

Ok, first off, tell me about Velvet Road. I've seen a lot about it. What is your role in this project?

I’m the director of Velvet Road, The film is about a man journey in the final moments of his life. its a film about choices and the idea that we all make them. The idea of hatred and ignorance being a powerful weapon against our society. The film itself takes place during the Civil rights movement during the height of racial tension in the deep south. I wrote the short film in college and made it my senior year.

Tell me how long you have been into filming and how you got into it. I assume it's from filming skateboarding?

I used to film when I skated in order to get sponsors and to push me and my friends to do cool stuff. Then we started editing and that turned into a 411 show. Realized that I couldn't skate my whole life so I went to school.

What were your first and most memorable cameras to use, and what is your favorite type of equipment to use now?

When I started I used a VX1000 it was like the skating standard at the time.
I now like anything that does the job... I use the right camera for whatever aesthetic I'm looking for. I actually don't shoot really anymore... I write and Direct everything. Because I’m so heavily camera oriented its easy to communicate to the crew and my director of photography.

I remember being so stoked on that 411 show when it came out. Was that a paying gig? Whatever happened to it? It seemed like that was about the time that 411 was finished making videos and was becoming online-only, right?

Yeah it's was around that time. It was not a paying gig. It was more of a fun thing.

Velvet Road /// Behind The Scenes from L. Gustavo Cooper on Vimeo.
So do you do much with skateboarding anymore? I remember seeing some rad photos that I think Shrickling took back in the day and being really stoked on them.

Yeah and no, I mean - skating use to be everything to me and it got to a point where life was changing but the people around me were not. So I started to focus on the positive and progression of reality.

What would you say your main hobbies are lately?

I like to build stuff like tables and shelves and whatnot... Filmmaking has become my life and that's really all I think about these days. I write a lot now.

It's awesome to hear that you are writing and directing. Making it happen! I have had so many friends from skateboarding that seem to have just fallen off in life.

Do you think that skateboarding contributed to your creative spirit, or do you think that's more of something that was just there from the beginning? I mean being creative, making things.

Yeah skateboarding gave me a lot of persistence... It taught me the idea of networking and that it's all who you know and surround yourself with. Skateboarding definitely taught me to have thick skin.

Who are some of your favorite skateboarders of all time?

Some of my favorite skateboarders of all time would have to be Mike Peterson of course, Heath Kirchart, and Marc Johnson.

Are there any other local film dudes/ projects you are stoked on right now? Anything Else you’d like to add?

I'm stoked on anyone who truly tries to do something passionately and shares that effort with the world.
Posted by Norm Stovall at 8:36 AM No comments: 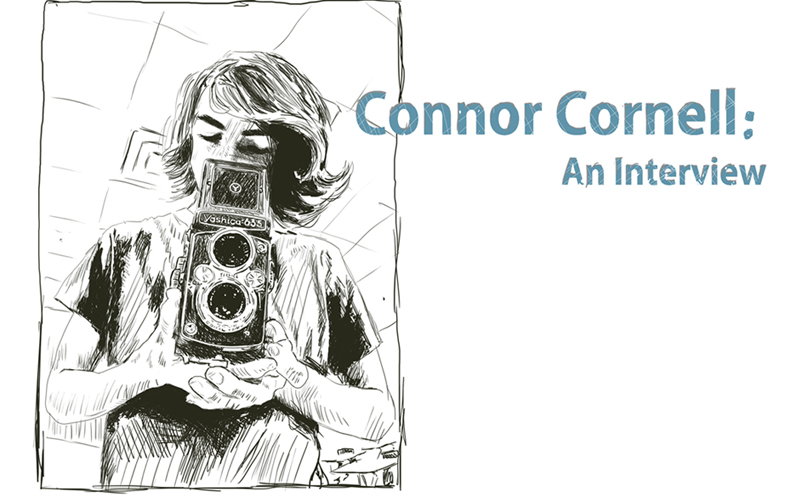 I have to admit I didn't know too much about Connor before I went into this interview. I've seen his photos and made note of them, especially his work with the Penny Brand. Rad stuff. I'm glad I got some insight on Connor and what he's into. He's into what he does, and I'm into it too. I hope you're stoked on this interview, I was stoked to do it.
-Norm

Ok, first off, how old are you and how long have you been taking photos?

What was your inspiration for getting into photography?

Well I took a photography class junior year in high school, just to fill an elective class, and thought I'd like it. I started using Canon Rebel XSI. After a couple weeks in that class, I was pretty amazed by what you can do with an SLR, so I couldn’t wait to buy my own, and start shooting surfing and skating.

That's cool. So what kind of equipment do you use now? 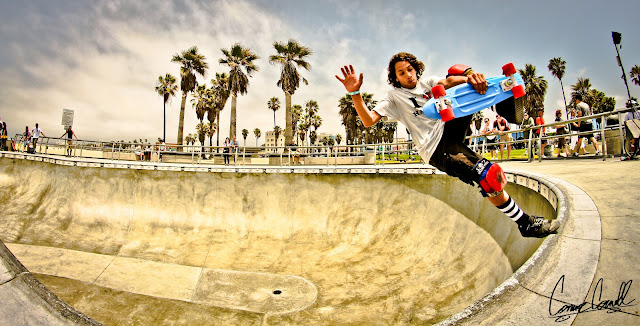 What's your favorite gear to use at the moment?

I've been shooting doing a lot of mid-zoom lenses. So I have to say shooting with the 50mm is my favorite at the moment. It’s actually easily to film with. Gotta love the nifty fifty.

I know you do a lot of skate stuff, but tell me about the other stuff you like to shoot. I've seen a decent amount of your car stuff on the web. Have you always been into cars? How about surfing?

I started with the car shooting when my friend Alex Canni and I got into the sport drifting, and developed a website based on the media side of drifting in early 2012. It’s called Drift5150.com, and it’s really insane and so amazingly fun to shoot and watch. I've been into cars, and the sport drifting for a little over two years now, and the sport is growing huge. 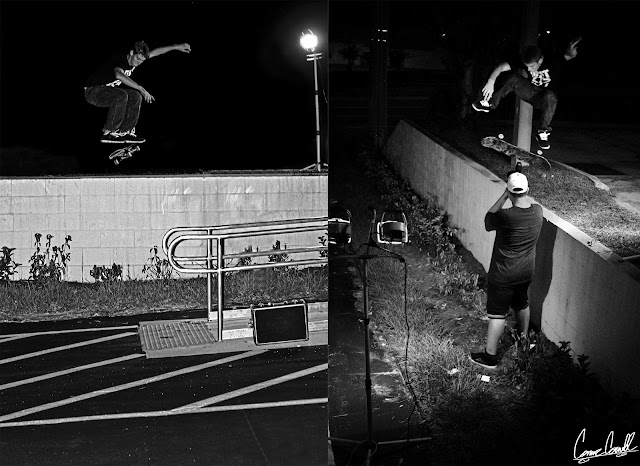 Ever since I was a kid I've been surfing, and I never really wanted to shoot surfing, because when there are good waves, I only want to be in water surfing. Haha. But the photo editor for VOID magazine, Logan Bowles, pretty much inspired me to start shooting surfing, because all of his work is amazing, and I wanted to try a shoot shots like that. Haven't had too many chances to shoot some good waves lately, but I intend to soon! 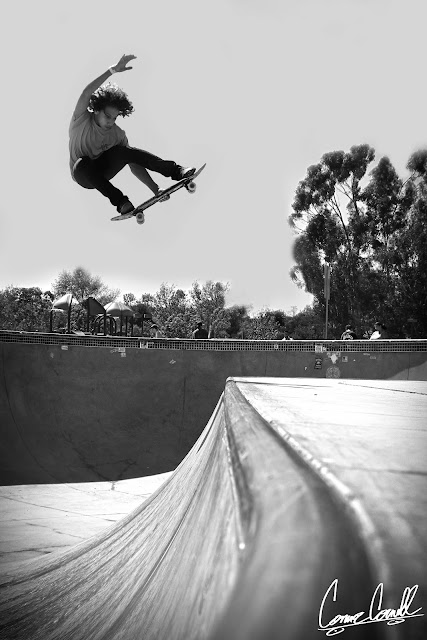 So I've seen you do a bunch of stuff with Penny skateboards, it got me wondering- is that a hookup or is that just a fanaticism of yours? What’s the raddest thing you’ve seen going down on a Penny?

A little of both. It begun with my friend Steven Pineiro. He just started shredding on this Penny, and doing tricks that were unthinkable on this plastic skateboard. So I filmed a short, little video of 20 min of skating one afternoon, and it ended up getting a lot of views and interest. So I sent it over to the guys at Penny skateboards on Facebook, they were pretty shocked with it, and we just started talking. Next thing you know Steven Pineiro, his sister Stephanie and I are on a plane to California to go on tour with the Penny crew. Skating ,traveling, and just having a blast with some Aussies. All expenses paid, too!
Skating with Steven and his brother Juan, you see so many sick tricks, but one that really stands out and is completely insane would have to be Steven’s finger flip in the combi bowl. Video isn't released yet, so wait for that!!

That's rad that you got sent on tour. Did you do much else besides shoot skateboarding when you were out there?

When we weren’t doing park events, We got to go all around LA, and saw a lot of famous places, got to hangout on the beach, (west coast is way better),and just had fun skating around the city.

I've never surfed out of FL, so Jacksonville is my favorite. As fir skating, grew up skating treaty, in St. Auggi, and it never gets old to me. I love that park. Transition/park is my favorite to skate. Favorite Places to film? Well I guess I've had the most fun filming in California, because it’s just an amazing environment to me. And over there, there are just spots after spots to hit and film, most of the spots being really unique. 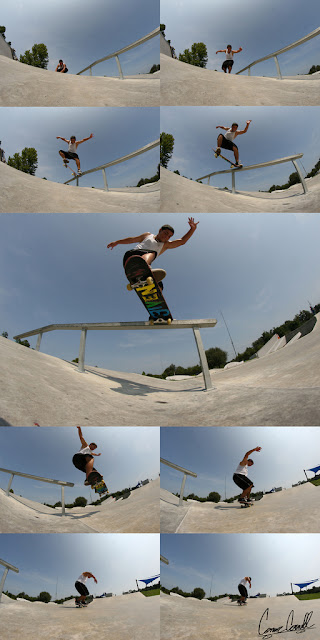 That's cool. I've been skating in St. Augustine a lot lately at the park by the lighthouse. So where do you live now?

Yeah I've only been there once. Fun little park! I live in Orange Park currently, which is away from everything! I really want to move out the beaches area now that I'm graduated. So much to do and shoot of there.

Are you still going to school?

I graduated this past year from Fleming Island High.

You're right about Clay county, It's a sprawling wasteland. I grew up out there, but way back then, I never had the OP Park, or anything. We knew a BMXer with a BMX vert ramp that was almost impossible to skate. That was it. Things are better now though. Besides the Penny video, do you have any other kind of project going on?

Yeah OP Park is about the only good thing about where I live, especially since it got totally rebuilt. I'm working on a full part of Steven for Penny and I have little side projects coming along, but other than that, nothing too serious right now.

Are there people you get inspiration from-like professional, or friend-wise?

I like to take inspiration from those who do professional work.

Well put. In closing, is there anyone you want to shout out to, or say thanks to, or tell us who to be on the lookout for?

Well, I really wanna thank my dad, for supporting me, and buying me my first camera. Thanks pops. Always there for me. Also shout out you for this interview! Also to the Pineiro's, and everything they have done for me, shout out to all the local homies, Aqua East, Void Magazine for running my first photo, and the guys over at Penny Skateboards!

Be sure to look out for the Pineiro brothers. They are on their way to the top. Real Talk.
Posted by Norm Stovall at 12:18 PM No comments: 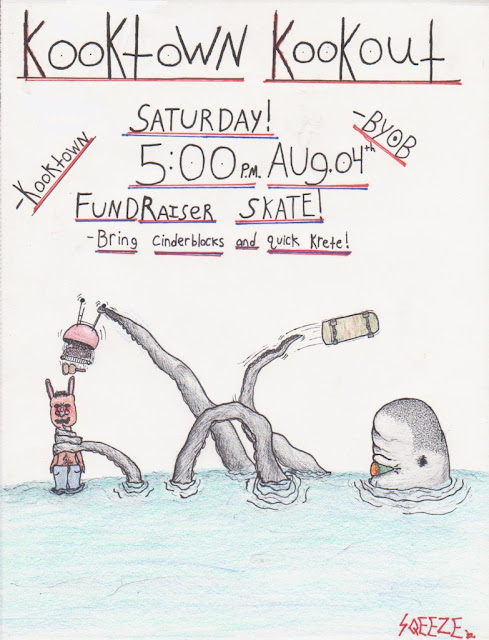 Posted by Norm Stovall at 8:00 PM No comments: