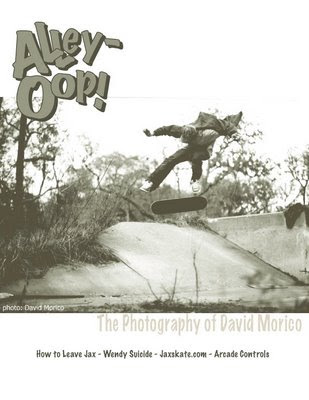 Access to a good photocopier is a hell of a thing. If you ever get me in a job with free access to a photocopier, you'd better keep an eye on that thing, cuz I will print some shit out. Case in point: Alley-Oop!. I don't think anyone outside my core group of friends remembers or has even seen a copy of Alley-Oop!. Not that I didn't try to get it out in the open though. I would print about 60-80 copies on the DL at my old temp job, risking my career of being an office temp in the process. It was worth totally worth it though. For me, anyway. Probably not so much of a big deal for other people. I'd drive across town, dropping off copies of my zine to all the shops, whether they wanted them or not.

Alley-Oop! started off as a letter to a girlfriend written in magazine format. It was what I did to pass my time in college. In the first "issue", I wrote a stupid story about a talking pancake while sitting in class, and stapled in some photos of me doing streetplants. It was all on a folded piece of notebook paper. This kind of thing went on for about 6 issues, until one day I decided to actually make a photocopied zine out of it.

Alley-Oop! number 7 featured Chris Sartain on the cover doing a backside nose grind on the old Grove Park Elementary School ledges in Orange Park. On the inside was an interview with the Florida based indie rock band Plastic Mastery, along with photos of my friends and acquaintances skateboarding, including Chris Nanny, Mike Peterson, Nate "Black Nate" Johnson, Travis Ochab, and Kevin Graver. I also tossed in a story from some a weird conspiracy theory newsletter. I cut it out, and glued it to the page. All the other text was either hand-written, or made from rub-off transfer letters. It was real ghetto, but out of all the crap I've put together over time, Alley-Oop! #7 was my favorite.

I took all my own photos in this issue. I actually owned a Canon SLR that took ADVANTIX film, and I put a $500 fisheye lens on the front of it. Do you know what ADVANTIX is? It's like a little rectangular box with film inside, like a cartridge. It was total shit, but I didn't know the difference or care at the time. It was my first camera. I took all my film to get developed at Eckerd's, a chain drugstore from back in the day. I didn't know how do develop film, and I didn't feel like learning. (It's a good thing my friends were photogenic, all of our spots were outdoors, and I didn't have to pay for the prints that I didn't want when having my film developed.)

So yeah, I would take these photos and staple them to the pages, and write captions over the top of them. I take back the part about the hand-written text, I actually had the Plastic Mastery interview printed with a dot matrix printer. Remember those? No? Well, look it up on wikipedia or something then. With all the hand-written stuff, I tried my best to emulate the lettering found in the zine Cometbus, my favorite zine at the time, and of all-time. It looked hand written, though now I'm pretty sure it was a custom font.

Jordon Fink and Lance Katz, as seen in Alley-Oop! issue 11.

I had one advertiser in issue 7, and that was Nicotine Skateshop, also known as Nicotine Smoke Shop. Nicotine sold skateboards and tobacco products. They paid me 8 dollars in store credit for the ad--I bought a shirt with it. Nowdays, Nicotine no longer sells skateboards, but back in the day, the crew was tight and I had lots of close friends in the group. They got the back page.

Other issues followed, of course, and in late 2004 I decided to try to make it look like a legit magazine. I had taken a couple of years off from the zine, but I wanted to try to start it up again. My favorite local zine, Truckstop, had ceased production, and I thought I would try to lessen the blow by creating a full-sized magazine. I didn't realize until 3 issues later what a shitty idea that was for me. Well, I guess the idea was good, but the product was lacking.

A photo of me, as used in the 'about me' section in the front of issue 8.

First of all, I wasn't doing the layout by hand. The first re-envisioned issue of Alley-Oop! was laid out using Mac Publisher Pro. The pages all had margins, the text was some random sized arial font, and the pictures looked grainy. The second one did much better. I made it the Tampa Pro issue. It was the first year I had ever made it out to the Tampa Pro contest, and Ryan Clements was cool enough to let me shoot photos. My fonts in this issue ranged from OK to FUCKING HUGE.

The next issue was a little lacking, featuring more 'lifestyle' crap, interviews with Suicide Girls, and a Borrowed article from Skatepark of Tampa's website. I got permission though, and I even used photos with SPoT's watermark on them in print. Real classy!

A photo of Jason and Ryan, current owners of Club TSI downtown, as taken at a gallery opening in their home loft.

The last issue of Alley-Oop!, unfortunately never made it to print. It could have been the best one, but unfortunately random page graphics and photos and a couple of finished features are all I have left of it. The cover touted photography by David Morico, which I'm pretty happy to have gotten my hands on. We later worked on other projects together, but David's photos for this issue will always stick with me.

So there it is. The history of Alley-Oop! Skatezine. More than you ever wanted to know. I do want to say thanks to Thrasher for saying nice things about my shitty zine back in the day though. It was motivational.