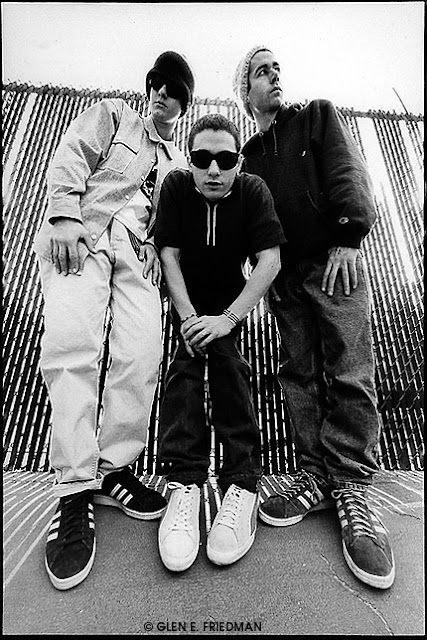 I think my first experience with music from the Beastie Boys happened sometime in the very early 90s. I was looking at some kind of collection of work by Glen E Friedman. I didn’t really get that they weren’t just some random skateboarders in the back of thrasher in the music section. I honestly don’t remember what I thought at first, but I do know that Friedman’s iconic photo of the 90s Beastie Boys would become such a symbol for my formative years as a skateboarder. I remember my friend Grant letting me borrow the Check Your Head album, which was unlike anything I’d ever heard. I think that at that point in time, the Beastie Boys had become the third band I had really gotten into, following the Smiths and the Cure. I remember how stoked I was to get that full sized poster and just have it in my room.

Over the years the Beastie Boys saw a number of evolutions in style, from their early punk and hip hop tracks to their distortion laden tracks of the 90s, to their modern style of Straight up Hip Hop. Their style has always been consistently their own, and that’s something anyone could tell after watching them perform. As they got older, their lyrics became stronger, their messages clearer, and their imagery louder. I remember some of the most significant and respectable messages I can remember coming from Yauch on 1994’ Sure Shot, where he puts himself past his humorous yet misogynist days with the lyric:

"I want to say something that's long overdue / The disrespect to women has got to be through / To all the mothers and sisters and the wives and friends / I want to offer my love and respect to the end."

Anyway, the point of this post was not to prove a point about how much I loved the Beastie Boys, it was to say that the recent loss of Adam Yauch, aka MCA, is something tragic to me. Cancer is obviously nothing to joke about, and it’s affected some of the closest people to me in my life. Yauch had been fighting cancer in his parotid gland since 2009, which I had discovered while listening to NPR’s interview with him that year.

Following diagnosis, Yauch became a vegan and considered himself to be on the road to recovery, under the assistance of his Tibetan doctors. (Yauch was a devoted Buddhist, by the way.) Tragically, it seems his treatments weren’t enough--Adam Yauch died on May 4th, 2012. (Yesterday, as I write this.) His death was sudden, sad and surprising, considering how little we’ve heard about him in the past few years. I can’t imagine growing up with the music he helped perform, and I’m thankful for the music he made. I’ll never forget the way he played bass on Sabotage while performing at the MTV music awards, and I’ll never forget Nathanial Hornblower, either. Thanks for everything, MCA. I’ll miss you. We all will.

http://beastieboys.com/
Posted by Norm Stovall at 7:25 AM