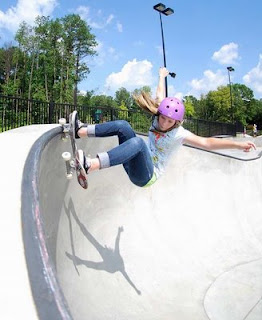 What is your full name?
Brooke Crawford

Where are you from originally?
Snellville Georgia

Where is the last place you rode your skateboard?
Grant Taylor's backyard bowl with Al Partenen. That was a pretty fun skate sesh.

Describe your first memory of skateboarding where you currently live.
One memory from when I first started skating was riding down the hill in my neighborhood on an Airspeed board from Wal-Mart and getting speed wobbles like crazy and my feet almost goin' numb from the vibration of the wheels on the asphalt. Haha.

Who do you skate with most, of all the people you know?
I usually skate with Ray Fennessy, Shawn and Chris Coffman, and Morgan Rutledge; they're all rippers and help me out a lot.

Name one thing that could make skateboarding better in your area.
One thing that would make skating better for me in Georgia is if there were more girl skaters here. I love going to contests in other states and skating with all the girls because it pushes me to skate better and its so much fun to be with your friends and be able to skate and also talk about things that you can't normally talk to the guy skaters about. 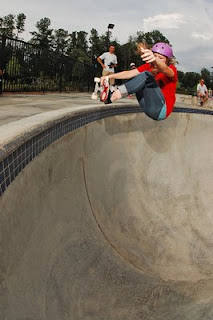 Do you think you will still be skateboarding 20 years from now?
I'm pretty sure ill be skating in 20 years, ill be 36 so that wont be too old. I see my self just cruising around and hopefully skating with my kids at that age.

What is the most common place you go to eat before/during/after a day of skateboarding?
Quicktrip is the place go between skate sessions. Haha- its quick and they have everything you need, me and Marllee Miller (Florida ripper) go there and get hyped up on some crunk juice. Haha

What is the last trick you learned, and how many tries did it take to learn it?
The last trick I learned was layback grinds. I got them after about 15 tries back to back. Its a really fun trick and cool little trick. 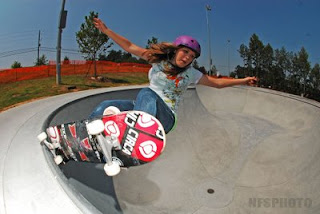 What are you going to do, now that you are done with this questionnaire?
I'm gonna go barge a new skatepark they're building near my house! Hopefully I don't get kicked out by the cops!

Click on any of these photos to enlarge. Thanks to ATLSkater.com for the photos. If you want to help Brooke get to Oregon, go here to make a donation. -Norm
Posted by Norm Stovall at 2:40 PM