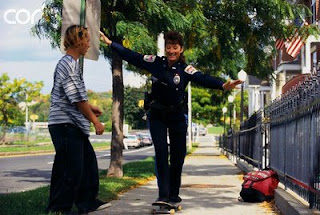 According to the Naples, Florida based naplesnews.com, One police officer took it upon herself to not only get kids out of no-skateboarding areas, but also arranged for kids to get complimentary paid memberships to a local skatepark.

"Instead, she found a solution that would make the businesses happy all while keeping the boys rolling. . . “If it wasn’t for her, we wouldn’t be skateboarding,” Jose said. . . . Cercone also used her encounters as an opportunity to build a relationship with kids in the community. . . .“I think it’s important for the young kids in the community to develop a good rapport between themselves and the police department,” Cercone said. “They are the future of our county.” "

You can see the full story here. Seems like I've been hearing more and more stories about police reaching out to skateboarders. Weird.
Posted by Norm Stovall at 1:09 PM

Email ThisBlogThis!Share to TwitterShare to FacebookShare to Pinterest
Labels: Randomness