Ante Up! Game of S.K.A.T.E. in Riverside Results are In 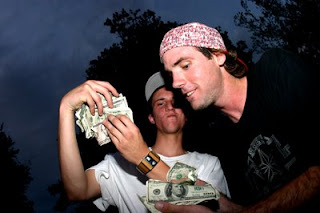 Looks like Joey Corey walks away with the first-place dollars.

It was just under a week ago that I found out about this contest. Kevin Graver gave me a call to ask if I could put a flier up on the site, which I gladly did. In just a matter of days, enough word got out to result in a virtual sea of skateboarders swarming on Memorial Park in Riverside. So many people showed up, in fact, that we got kicked out by the police just 15 minutes into the the second game. No worries though, everyone just trekked out to the basketball courts in the back end of Riverside park, which was just a few blocks away. This spot ended up being an awesome place for the event, due to the smooth surfaces and the secluded location.

The games went fast, and in the end Joey Corey walked away as the winner with a handful of cash. Lots of highlights to go over, so check back tomorrow for footage of the final matches and reflections. For more photos, go to the Flickr photo set here.
Posted by Norm Stovall at 9:11 PM