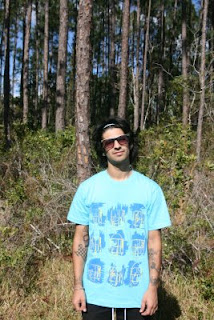 What is your full name?
Erin "Sparky" Dray
Where are you from originally?
I'm from a little town called Grand Prairie,Texas. you wouldn't know it unless you've been there. its about 30 min. from Dallas.
Where is the last place you rode your skateboard?
At Aberdeen yesterday. Good little session with all the local kids before it got dark.
Describe your first memory of skateboarding where you currently live.
The first time I remember skating here in Florida was at treaty park with P-nut, Kyle, and I think Ben was there. This was years ago before I even moved here and we were just hucking ourselves up the step up one after the other. It was good times.
Who do you skate with most, of all the people you know?
If I'm gonna be completely honest, I would have to say myself. Get up and just go out early and pop in them headphones is all I need to have a good time on my board. Other than that it's probably Kyle or Dick.
Name one thing that could make skateboarding better in your area.
I don't know if anyone is to familiar with state road 210, but if you are you know that I'm not lying when I say that anything would help. the parks are OK but I have to drive a good little ways to get any decent street spots. 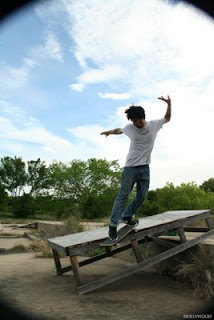 Who do you look up to the most, and why-skating, or otherwise?
I try to look at the way people around me are handling things in their lives, so in a sense I look up to a lot of people. Duddy to start off with for steppin' up and takin' crown to a new level. Anyone that's trying to better themselves or their situation is worth looking up to at least a little bit.
Do you think you will still be skateboarding 20 years from now?
I'm sure gonna try to. I will go as long as my body will let me. And if not, I will definitely be doing something that is in the skateboarding world.
What is the most common place you go to eat before/during/after a day of skateboarding?
I go to the gas station. If its early I just get myself a big banana nut muffin and a chocolate milk. If its later in the day, I go for a big Dr. Pepper, some cinnamon pop tarts, and some hot Cheetos. and depending on how low I am at the time, a pack of smokes. 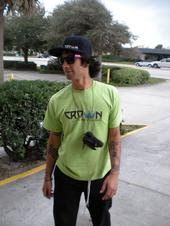 What is the last trick you learned, and how many tries did it take to learn it?
Good fs k grinds. I've been working on 'em for a while but I just got 'em down pretty well. K grinds are so scary frontside 'cuz if you overshoot it, you're done. Not like backside where you can just step off.
What are you going to do, now that you are done with this questionnaire?
Have a glass of milk, watch some Squidbillies, then some King of the Hill.
Posted by Norm Stovall at 5:30 AM