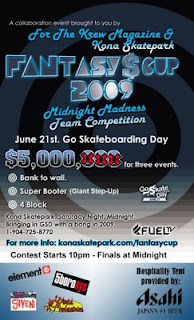 Some people have emailed/texted/walked up and asked me about this upcoming event. I really didn't know much, but this post at Kona's website clears it up for me. Directly from Kona's website:

"Teams are starting to line up for next weeks Go Skateboarding Day Event at Kona. So far from the shop side of things Westside Skate Shop, New Blood, MIA, Southern Boarder and Progressive are all bringing their big guns. The Manufacturers are starting to step up as well with Element, World Industries, 5Boro and Given all bringing teams mixed with pros and man-ams. Its gonna be a face off between the shops and manufacturers that no one should miss. Park will be open for skating all night long. Special thanks to Red Bull and Asahi, Japan's #1 Beer. Hospitality tents representing both will be open all night as well."

So rest assured that this will be a fun contest to watch, with free beer to boot. Although originally I thought it was a local contest, I now know that that isn't the case. However, this IS a good way to get stoked on skateboarding before Go Skate day (see last post), which guarantees lots of free skateboarding to everyone who wants to participate, and a chance to win money for those who want to compete without having to pay an entry fee, and free food for those who show up at Kona. I hope to see you there.

Click the Flyer to Enlarge
Posted by Norm Stovall at 2:28 PM